In this tutorial we will have a complete working temperature aggregation application with different type of components and deployment devices.

The temper application has a service-oriented architecture SOA composed of components and services depicted in the following picture: 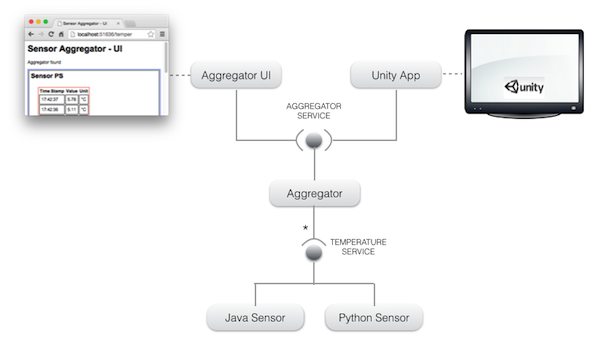 There are two services:

Now, its time to manage the deployment of these components. In this use case, we can have different type of execution machines:

COHORTE provides a composition language which helps administrators fixing some rules concerning the deployment and instantiation of application components.

The following picture depicts the graphical notation of the resulting specification for this use case: 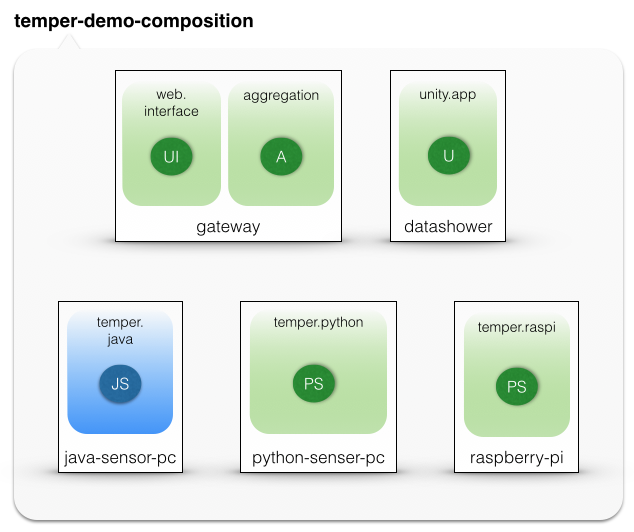 gateway-node/conf/composition.js file (view it here) represents the JSON equivalent for this deployment and composition specification.

We have created and prepared the different COHORTE nodes for each of the targeted devices. Each node contains the necessary bundles deployed on the repo directory and configuration files on the conf directory.

Extract the downloaded zip file somewhere in your file system. You can try the different nodes in the same machine or distribute them in different machines.

Ensure to have COHORTE installed on your system. If not the case, refer to the downloads page to get the latest available version and to the setup documentation for installation details.

In the next steps, we will use the nodes to execute our application. For clarity, we will proceed the execution of the temper application following these steps :

At this first step, we highlight the multi-language components implementation supported by COHORTE. In our described application in section 1, the Hello Service is implemented in Python and in Java. In this demonstration we will show you how COHORTE manage to have the same runtime infrastructure for either Java or Python implementations. We see also how COHORTE creates Isolates as described in the composition specification (and as responds to runtime crashes).

At a first step, we try to launch in one machine two temperature sensors implemented in different programming languages (as shown in the following picture). We starts also the aggregation component and the web user interface to check the collected data.

To accomplish this requirement and following the composition specification, we need to start these three COHORTE nodes in one machine :

All the components follow the Service-Oriented Architecture (SOA) detailed in the first section of this chapter.

Go to the downloaded gateway-node directory and type the following command to start it as a Top Composer :

Accordingly, this node will use HTTP connection mode. The discovery of other COHORTE nodes will be carried out using Multicast over TCP/IP. Communication between nodes will be ensured using TCP/IP sockets. This limits the scope of the participating COHORTE nodes to local network area.

Other important configurations are the web-admin and shell-admin ports. The latter is used to remotely access the shell of this node (e.g., nc localhost 9001), while the former is used to access the Web Admin interface in a web browser using this address : http://localhost:9000/admin 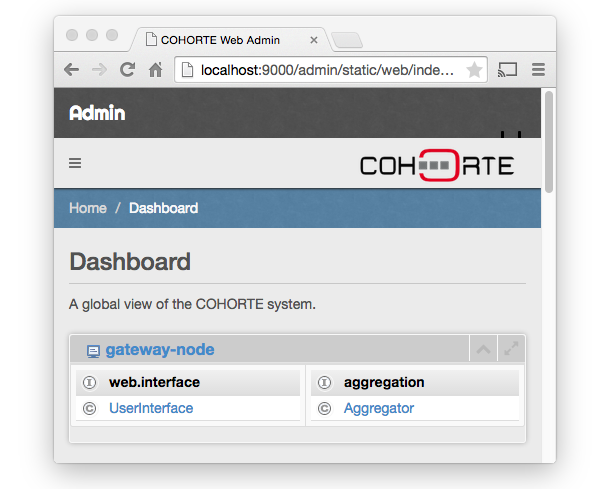 You notice that there is only one COHORTE node at this time (gateway-node), which contains two isolates (web.interface and aggregation) as specified in the composition specification.

This command will start the corresponding node and participate to the global application. In particular, the Top Composer started before (and which have the composition specification file) will order these nodes to instantiate sensor components corresponding to their nature. Hence, in the python-sensor-node we will have an instance of the component python-sensor-factory and in the java-sensor-node will will have another instance of java-sensor-factory component. 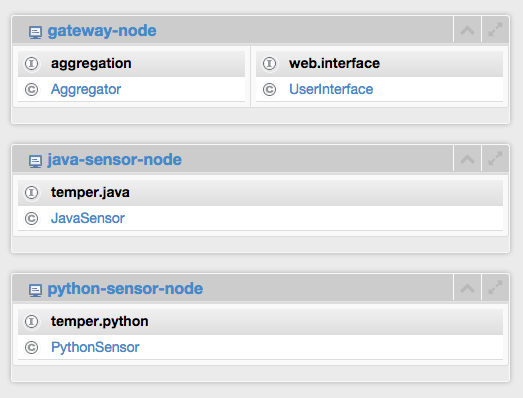 Check the aggregator web interface, you will notice new two columns for Python and Java sensors.

All this three COHORTE nodes are located on the same machine. Let now integrate a new node which runs on separate machine located either in the local network area or somewhere in the Internet.

Let’s add another different device to our application. In the downloaded zip file, there is a pre-prepared COHORTE node called raspberry-node. If you have a Raspberry-Pi device, install Cohorte Python distribution and put this node on it. Otherwise, you can test this node in any other device (including the one you are already working on).

Go to the raspberry-node and start it using the following command :

You will notice its appearance in the Web Admin, as well as on the Aggregator web interface.

In order to get your application deployed in the Internet level, you should start the Top Composer in XMPP mode. We will use an XMPP server as transport and discovery middleware. 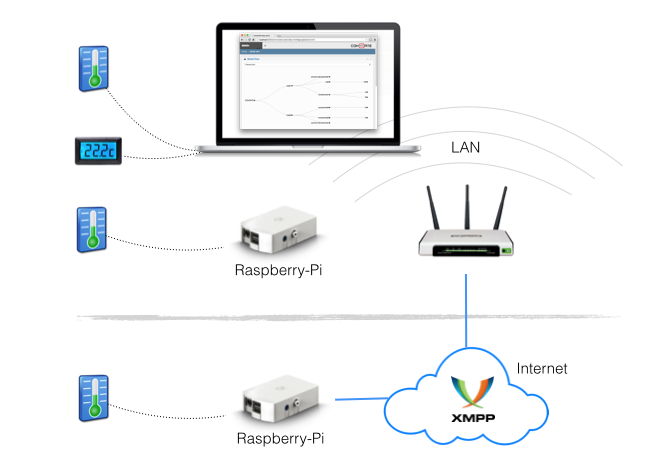 This will run the Top Composer using the two communication modes : HTTP and XMPP as provided on run_xmpp.js startup configuration file :

This last node called at runtime remote_raspberry could be placed any where the time he has access to the configured XMPP server (see run_xmpp.js).

Now it’s time to add the 3D viewer of our temperature sensors. 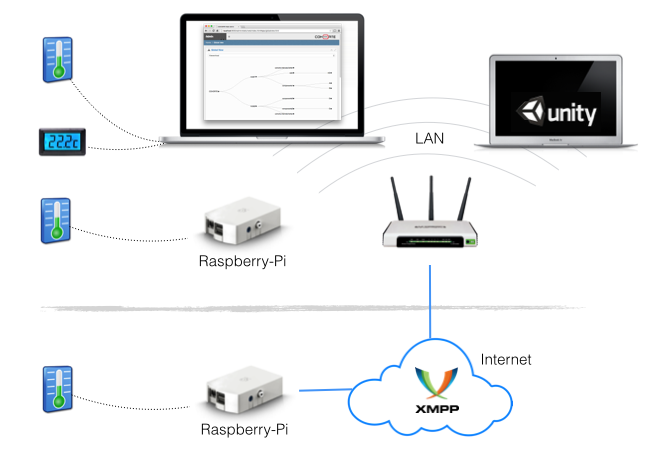 Download the already implemented viewer corresponds to your platform :

The downloaded zip file corresponds to a static COHORTE node. No composition will be ordered from the Top Composer, the local component will be instantiated at startup by the node itself.

At startup, you have to give the application’s ID specified for the Top Composer (temper) and the 3D viewer will reflect automatically the detected temperature sensors and their collected last value.

The unity is a .Net application. We have integrated C# components in COHORTE so that will be considered as (remote) services.